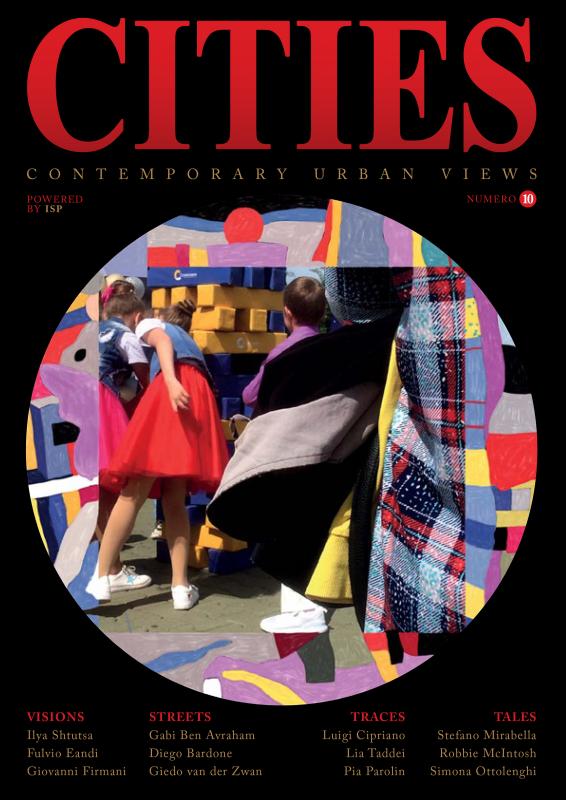 In 2022 the CITIES magazine reaches number 10! A good number, which we honestly didn't know we would reach... and this already spurs us on to move forward.
You can browse the 10 issues of CITIES online at https://issuu.com/isp-italianstreetphotography

Similar operation in October 2017, for the realization  of the second issue of CITIES, coordinated in 8 cities by the team of ISP authors and  then presented in Rome and Milan by Officine Fotografiche.
Cover by Andrea Scirè
Browsable in https://issuu.com/isp-italianstreetphotography/docs/cities_2

For the third issue of CITIES, produced in the spring of 2018, the contents of the photographers participating in the WS held  by Giovanni Albore, Enrico Barocci, Michele Battilomo, Adriano Cascio, Ciro Cortellessa, Michele Di Donato, Francesca Fabiano, Giorgio Galimberti, Maurizio Targhetta and Andrea Scirè were organized not only by city (Cities reviews) but also in a special section (   Come in un specchio) and appeared a large section dedicated to a related project, Silenzi Urbani, with 5 projects by  Luca Setti, Assunta D'Urzo, Loredana Celano, Marko Vogric   , Luca Rotondo.
In addition to 3 portfolios by Andrea Alberti, Claudio Campanella, Giuseppe Pitino.
Cover by Adriano Cascio
Browsable in https://issuu.com/isp-italianstreetphotography/docs/cities3

The fourth issue of Cities, produced in the autumn of 2018, represents an important qualitative leap for the Magazine, after the stylistic restyling achieved with issue 3.
From this issue  the core of the magazine are  shared projects,  focus developed by mentors and shared in production with the participants, sections dedicated to the selections of the images made.
A challenge, with mentors committed to directing but also producing with other photographers.
Adriano Cascio, Michele Di Donato, Francesco Faraci, Salvatore Matarazzo, Graziano Perotti, Giuseppe Pons, Maurizio Targhetta and Andrea Scirè, led and coordinated production in Bari, Catania, Cefalù and Castelbuono, Genoa, Milan, Novara, Rome, and Trieste.
And again 4 Portfolio, Antonio di Canito, Francesco Fredella, Marco Rappo, Valentina Minutella.
And a special dedicated to the Trieste Photo Days Festival.
Cover by Salvatore Matarazzo
Browsable in https://issuu.com/isp-italianstreetphotography/docs/cities4

With CITIES 5 the path of shared projects is sophisticated, with stories designed to offer interesting ideas to a small group of photographers, coordinated by some mentors.
Realized  in mid-2019,  the Zine offers 3 shared projects, Carnival with Salvatore Matarazzo in Viareggio and Venice, Una Città cento popoli with  mentor  Adriano Cascio  in Prato and Garbata Garbatella in Rome, mentor Roberto Gabriele.
Then the section dedicated to authorial stories takes shape, with the 4 series  Snow in Tokyo by Tadashi Onishi, Americana by Alex Coghe - Wedding Moments by Adam Riley - we believe in series    by Diego Bardone.   Then 3 Portfolio:  Wonderland by Giuseppe Pitino - China Town by Iuri Camilloni - Vis pugnace  by Francesco Forbino, and the Special Urban Photo Contest 2019
Cover  by Adam Riley
Browsable in https://issuu.com/isp-italianstreetphotography/docs/cities5

With issue 6  of CITIES, released in the spring of 2020 at the beginning of the pandemic, the adventure of shared experiences ends and the magazine becomes adult, complete, modern, dedicated to urban photography in all its aspects: from reportage, to street, to social, to documentary photography. The collaboration begins with  Attilio Lauria, who with the Social editorial staff of FIAF (Susanna Bertoni, Antonio Desideri, Giuseppe Scalora and Debora Valentini) signs the section dedicated to international authors, Worldwide, with the stories Coincidences  by Jonathan Higbee, Aka repeat to fade by Stuart Paton,   My Town Siófok  by  Marietta Varga and  Pier to Pier by Giedo Van Der Zwalt.
This is followed by a section of stories by Italian authors, Storie del Bel Paese by Sonia Pampuri, with La ballata dell'Aqua Granda  by  Maria Grazia Beruffi and Rainbow Pride  by  Massimiliano Faralli, an Author Focus on Michele Di Donato and two Portfolios curated by him,  Waiting Time   by   Domenico Fabiano,  and Fog City, the vertical city of Enrico La Bianca.
Cover by Michele Di Donato
Sfogliabile a https://issuu.com/isp-italianstreetphotography/docs/cities6

Cities 7 is presented at the Trieste Photo Days festival in the  late October 2020 window, before returning to pandemic lockdown, and is consolidated in its structure  with the collaboration of Attilio Lauria and Sonia Pampuri, and with the entry of Vanni Pandolfi who takes care of the section dedicated to Italian Authors, Stories from the Belpaese.
The issue, put together in its final photographic choices by Angelo Cucchetto and our photoeditor Graziano Perotti, collects three sections with 12 stories by talented authors, divided into three main sections;
Worldwide - edited  by Attilio Lauria and  the social editorial staff Fiaf (texts  by Susanna Bertoni, Antonio Desideri, Irene Vitrano and Debora Valentini) with the 4 stories Upper east side story by Alain Schroeder, Thruthiness by Bojan "Chibsterr" Nikolic, Urban visions by Streetmax21 and When the trees are gone by Diana Cheren Nygren. stories
of the Bel Paese, curated  by Vanni Pandolfi, who selected 4 stories by very interesting Italian authors: unreal by Giacomo Infantino, Glitch  by Gianmarco Maraviglia, Fronte del Porto by Fabio Moscatelli and Cronache Immaginarie di un Tamatore di cavalli   by  Lorenzo Zoppolato.
Finally, a section dedicated to Inside, projects carried out in "viral" quarantine, curated  by Sonia Pampuri, with four selected projects: Circus Quarantine  by  Fabio Itri, Condominium by  Loredana Celano, Behind Glass by  Lisa Sorgini, Il tappeto Volante  by Simone Raeli.
Cover by Fabio Itri
Browsable in https://issuu.com/isp-italianstreetphotography/docs/cities7

CITIES 8, spring 2021
A round issue, and also to celebrate 4 years of life we introduce an important section, which we are sure will interest many readers: the Focus Authors, interviews and profiles of interesting authors in the international and Italian panorama of Photography, with an eye to urban photography.
Worldwide  - stories by foreign authors edited by Attilio Lauria and the social editorial staff Fiaf (texts  by Sonia Pampuri, Mariafrancesca Pantano, Antonio Desideri, Susanna Bertoni)
Cuban Sketches by Richard Bram, Streets  World by Gabi Ben Avraham,  Streets of NY by Michelle Rick,  Shanghai streets by Cody Ellingham stories from the Belpaese,
stories by Italian authors edited by Vanni Pandolfi, texts by  Vanni PandolfiSouthern Streets by Michele Liberti,
Islam Space by Graziano Panfili,  Metropolitan impressions by Giovanni Paolini,  China Land by Giovanni PresuttiFocus Authors  - interviews and focus portfolio by Sonia PampuriSi,Viaggiare... - Roberto Gabriele,   Intimate Imagination - Lorenzo Cicconi Massi,  Mutatis mutandis - Nick Turpin, The surprise of art! - Gulnara Samoilova.
And to celebrate this milestone worthily, the cover of CITIES 8 is a splendid image created in Milan by Graziano Perotti!
Browsable online at https://issuu.com/isp-italianstreetphotography/docs/cities8

Autumn 2021, CITIES 9!
CITIES 9 is ready, a very interesting number!  In this issue, in addition to the 4 stories of foreign authors and the 4  of Italian authors we have two author focuses with  interviews and a section with 4 stories awarded at the TTA, the award on travel photography launched by Starring in February.  www.traveltalesaward.com
The magazine opens as usual with  the Worldwide section, dedicated to foreign authors, stories of authors who well represent the whole world of modern international urban photography: Jeffrey Stockbridge, Joseph Ford, Liu Tao, Maude Bardet.  This is followed by The Italians section, dedicated to Italian authors and curated by Vanni Pandolfi also in the texts, which has selected 4 stories by Italian authors with strong personalities: Umberto Verdoliva, Gabriele Lopez, Gabriele Croppi, Lorenzo Pesce.
Then the Focus Authors section, curated by Sonia Pampuri, with two interviews with Fabio Moscatelli and Tadashi Onishi. Ample space is dedicated to each author, with images of his different works and Sonia helps us to know them better through their works. Finally, the special section Travel Tales curated by  Simona Ottolenghi with 4 stories awarded at the TTA, the award dedicated to travel photography www.traveltalesaward.com DESTINO by Nadia Cianelli, Che ne Saharà di noi by Mario Cucchi, Cara by Daniela Giannangeli, Like a Monet by Fabio Magara
This issue has also been put together in its final photographic choices by Angelo Cucchetto and our photoeditor Graziano Perotti, who also signs the cover of the magazine, with a splendid emblematic and iconic image.
Browsable online in https://issuu.com/isp-italianstreetphotography/docs/cities9

In 2022 the magazine CITIES arrives at number 10 !  A nice number, to which we honestly did not know we would arrive ... And this already spurs us to move forward.  To celebrate this milestone worthily we have prepared with some of our partners a great initiative: the collective exhibition "CITIES, a contemporary view", hosted at the 10th edition of the European Photo Festival, then from July 1st in Corigliano Calabro Fotografia and finally by Officine Fotografiche Roma from October 21st, with the joint presentation of CITIES 10, a special volume composed of a dozen projects and stories selected from a general call. Then collective exhibition with 3 stages and special edition of the magazine CITIES 10 !